How Peter Lee made Covered California a healthcare success 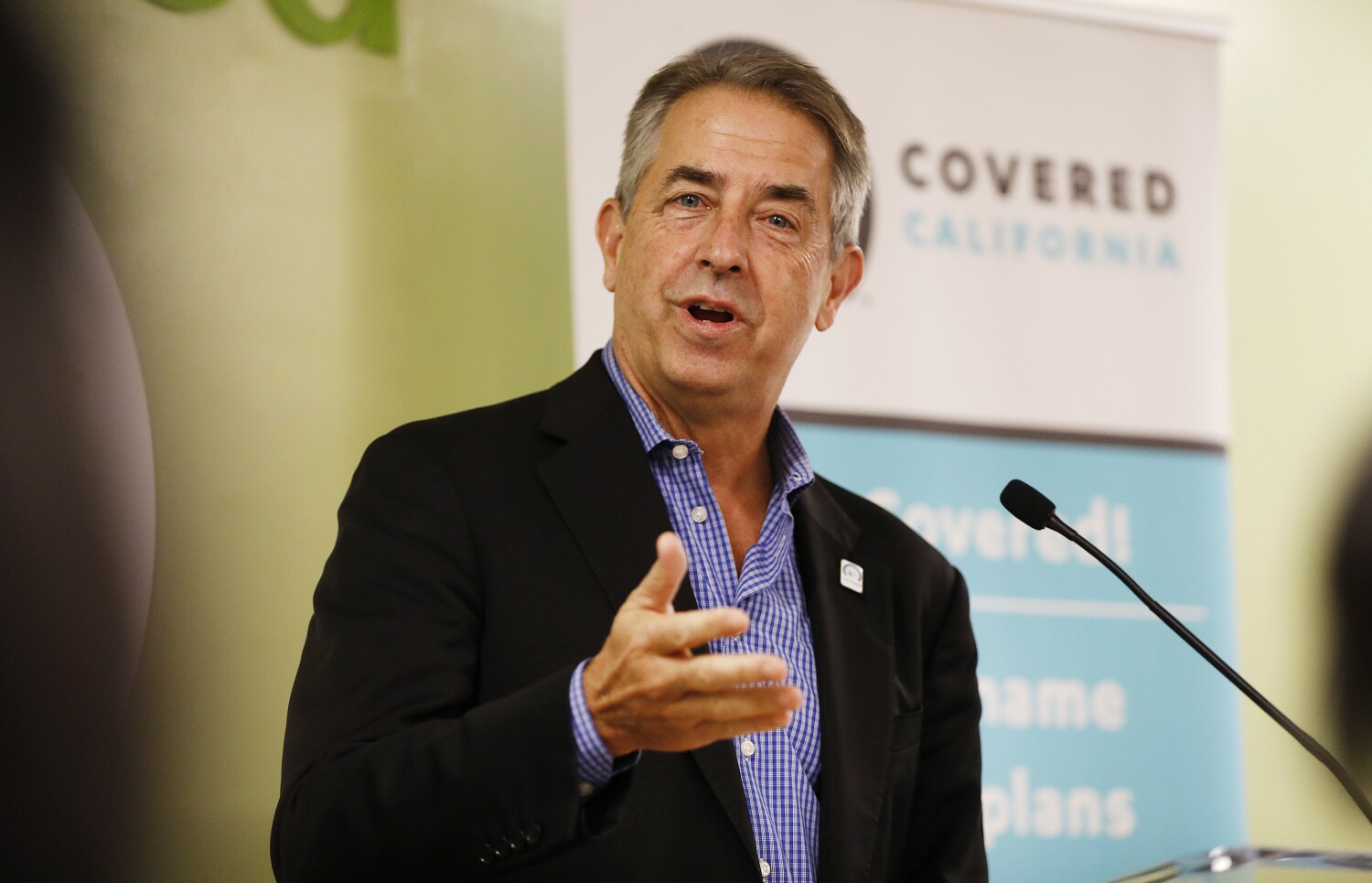 One could say that service in the name of public health was baked into Peter V. Lee’s bones.

His father, also Peter Lee, founded the family medicine department at USC and spoke out in favor of the enactment of Medicare in 1965, a stance that provoked some members of the university alumni association to call for his dismissal.

His uncle, Phillip R. Lee, helped create and implement Medicare as an officer of the Department of Health, Education and Welfare, then became chancellor of UC San Francisco, and returned to Washington to serve then-President Clinton as an assistant health secretary.

Improving healthcare is an eternal enterprise in America.

So Lee’s appointment in 2011 as the first executive director of Covered California, the state’s Affordable Care Act marketplace, seemed almost pre-ordained. The Sept. 16 announcement that Lee, 62, would step down from the exchange in February, offers a perfect opportunity for taking stock of the state’s extraordinary success in healthcare reform over the last decade, as well as looking ahead.

Lee came to the job with more than a family pedigree: A Pasadena native with an undergraduate degree from UC Berkeley and a law degree from USC, he had begun his career in public health running programs at the National AIDS Network in Washington in the 1980s.

Subsequently he served as executive director of the Center for Health Care Rights, a Los Angeles consumer advocacy group, then spent eight years as CEO of the Pacific Business Group on Health, a coalition of public and private healthcare purchasers, followed by a stint working on healthcare reform in the Obama administration.

Under his leadership, Covered California has been perhaps the most successful ACA marketplace. The exchange’s approach to coverage has helped California reduce its population of uninsured adult residents by nearly 11 percentage points, to 7.7% in 2019, the second-best record in the nation and only a hair behind the leader, Nevada.

Residents of states that have resisted the ACA, such as Texas and Florida, are still saddled with uninsured rates of 15% or higher.

The California exchange’s rate increases have consistently been lower than the national average, including a preliminary 1.8% increase expected for 2022 plans and an average annual rate increase of only 1.1% over the last three years. Its offerings have been remarkably stable, with 12 insurers expected to offer plans through the exchange in 2022, including four that are proposing to reduce premiums from 2021 — Anthem Blue Cross, L.A. Care, Molina and Sharp.

The advent of the Affordable Care Act marked what Lee calls “a major pivot as a nation” on healthcare. Up to then, in the individual market, “insurers wrote their own rules. They would say, ‘I’m going to offer these benefits to some, I’m going to turn these people down but not these people. I’m going to not offer mental health benefits.”

The ACA aimed to end these practices. It mandated that carriers spend at least 80% of their premiums on medical claims and improving the quality of care, outlawed refusing or surcharging coverage for people with preexisting medical conditions, and required the carriers to cover a menu of essential benefits, including prescriptions, hospitalization, and maternity and mental health services.

Covered California, however, went further, Lee told me. It established itself as an “active” exchange that set benefit and quality rules for participating insurers to meet, in many cases more stringent than the ACA’s rules. ACA plans in California had to be standardized more stringently than the ACA required.

Plans at each metal level — bronze, silver, gold and platinum — had to be identical to each other, reducing consumer choice to two basic factors — the plans’ premiums and their provider networks. (Covered California strived to make sure that no matter how narrow a carrier’s provider networks, all the required benefits were available.)

The exchange turned the traditional insurer approach of pocketing profits, which was to discourage customers from seeking care, on its head.

“Our design was aimed, as much as possible, to encourage people to get the right care at the right time, not discourage them,” Lee says. “We didn’t want any financial hurdles to get to a primary care doctor. If you take a silver plan, there’s no deductible unless you get admitted to the hospital.”

California insurers must disclose every year the steps they’ve taken to reduce health disparities among ethnic, racial and income groups, to rein in high provider and drug prices and to meet other quality goals.

Insurers may have balked at first, but they also came to understand that on California’s leveled playing field and given the state’s efforts to attract the largest coverage pool, they had a better chance to secure profits than in many other states.

Only in 2017-2019 did rates increase by more than 4.2% due almost entirely to Trump administration efforts to sabotage the individual market in those years. Even so, customers who shopped around could reduce their rate increase or even find lower rates year-to-year.

Lee didn’t achieve all this entirely on his own, of course. He got a heavy boost from California’s political context. That started with the foursquare embrace of the ACA by then-Gov. Arnold Schwarzenegger, who had been trying since 2007 to craft a universal healthcare program for the state.

After Jerry Brown took over as governor in 2011, the state expanded Medi-Cal, its Medicaid program, to take advantage of the ACA’s 100% federal subsidy for the expansion. (Twelve states, all of them under the control of Republicans, still haven’t expanded Medicaid despite clear signs that the move saves money and improves health.)

California also established its own individual coverage marketplace instead of leaving the task of enrollment and marketing to the federal government, as 35 states did.

California’s choice inoculated it from Trump’s slashing of marketing and outreach funding to nearly zero; while the Trump cuts were in place, California continued to spend some $100 million a year on marketing to encourage younger and healthier residents to enroll.

The funding came from a 3.25% assessment on health plans. That flowed through to enrollees, but since California’s larger member pool kept premiums lower by 20% than they might have been, according to Lee, the assessment paid for itself.

Legislative initiatives further moderated the Trump effect. California outlawed the short-term health plans promoted by the Trump administration, which were outside the ACA’s jurisdiction.

Those plans were cheaper than ACA-compliant plans, but only superficially. They’re allowed to turn away applicants with preexisting medical conditions and to offer only limited benefits. Enrollees diagnosed with costly conditions or serious injuries often discover the coverage gaps too late.

“We weren’t going to allow plans that are cheaper because they’re crappy,” Lee says.

The Trump years were nerve-wracking for Lee and Covered California. If Republicans had managed to repeal the ACA, as Trump and the GOP establishment aimed to do, “We had no Plan B,” Lee says. “Healthcare in America requires federal dollars and federal consistency. Absent that, no state can make it up, even California. It would have been a stark new future, and millions of Californians would have been without health insurance.”

The state has progressively extended Medi-Cal coverage to more residents without legal immigration status — starting with children through the age of 18 in 2016, to young adults up to age 26 last year, and to adults up to age 50 starting next May 1.

That reflects the recognition, reinforced by the experience of the pandemic, that “you can’t draw a little island around your next-door neighbor and say, ‘You’re undocumented, so I shouldn’t care about your healthcare.’ If we have people living here and contributing to society and getting sick because they don’t have insurance coverage, we will all foot the bill when they show up at the ER, or when they go to work in a restaurant and get people sick.”

California’s reliance on its own marketplace gives it extraordinary flexibility to offer coverage in critical situations. In 2019, the Legislature permanently expanded Covered California’s open enrollment period, when all customers can enroll unconditionally for the next year, to Nov. 1-Jan. 31. That protects state residents from the sort of manipulation of open enrollment engaged in by the Trump administration as a way to hold enrollments down.

After the pandemic struck, Covered California was able to extend open enrollment through May 15, 2021. After the American Rescue Plan expanded premium subsidies for the individual market, the state exchange opened a special enrollment period through the end of this year for uninsured residents and those with plans ineligible for subsidies.

After 10 years, healthcare reform is still a work in progress. “Improving healthcare is an eternal enterprise in America,” Lee told me. We took a giant leap with the Affordable Care Act toward making it more just and more equitable.” He sees Covered California as an exemplar and a proving ground for methods to move toward those goals, though California still struggles with them — although the state’s overall uninsured rate was 7.7% in 2019, among Latino residents it was 12.66%.

Lee hasn’t said what he plans to do in his next act. He says he gave Covered California a six-month lead time to enable its board to launch a nationwide search for his successor, and to give him time to negotiate the exchanges next contract with carriers, to take effect in 2023. He says his thoughts turned to moving on after his mother and his uncle Phillip died in the last year.

“I’ve been involved with healthcare since the AIDS epidemic, and still will be,” he says. “I just don’t know how.”