Hiltzik: What can Larry Elder do as governor? Not much 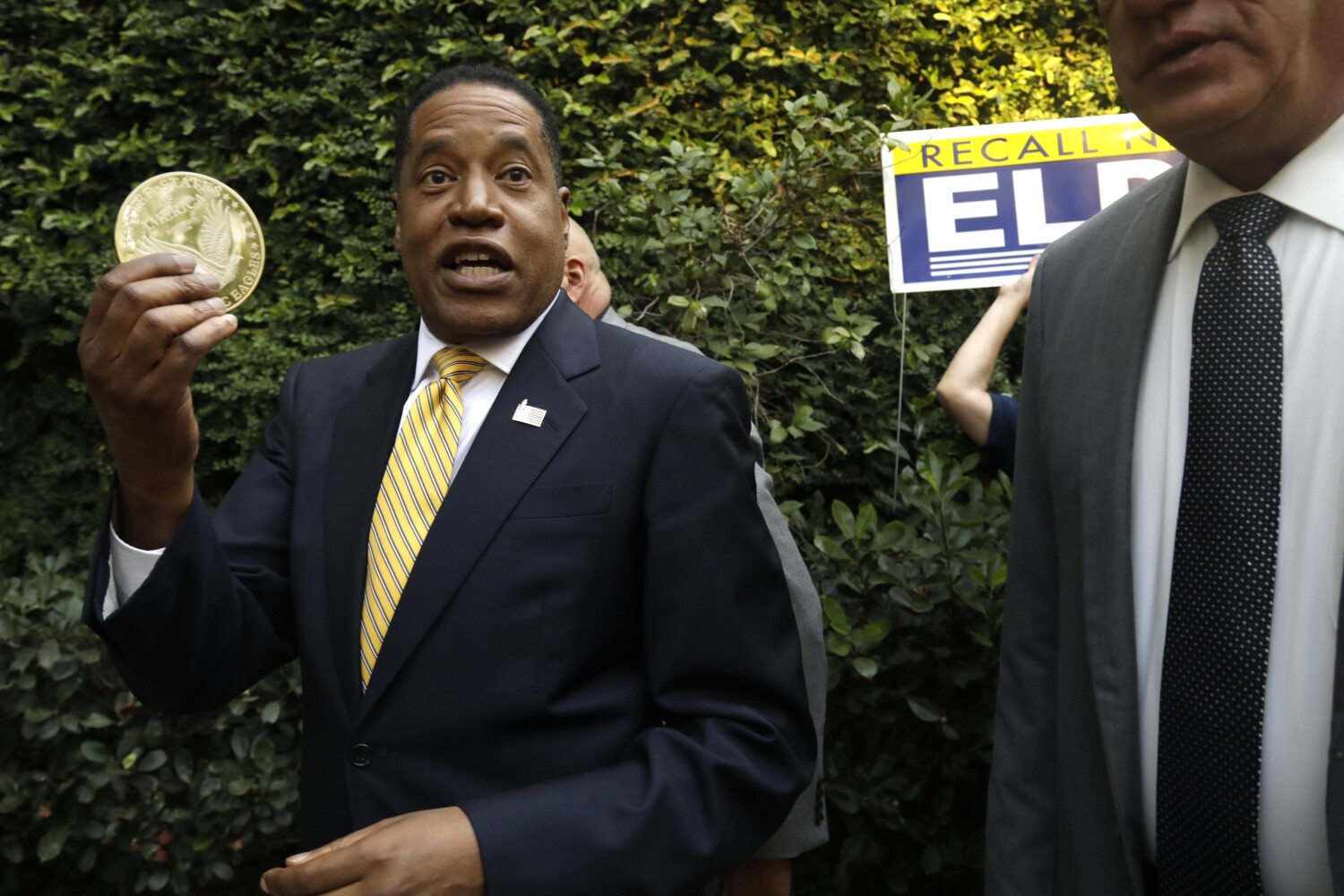 As radio talk show host Larry Elder increasingly appears to be the front-runner as the candidate to beat if Gov. Gavin Newsom is recalled on Sept. 14, the question about an Elder governorship should be changing.

The short answer is: Not much.

A Republican governor coming out of the recall is going to face incredible and mostly insurmountable obstacles in actually changing policy.

A conservative Republican in the Trump style, Elder would be taking office in a deep blue state, facing a legislature with Democratic supermajorities in both houses and an executive branch brimming with officials who have spent years implementing a progressive agenda on global warming, labor rights and a host of other policy areas.

“A Republican governor coming out of the recall is going to face incredible and mostly insurmountable obstacles in actually changing policy,” veteran Democratic consultant Darry Sragow says. “The new governor will have a bully pulpit, but when it comes to deeds, there aren’t a lot of options.”

It’s proper to stipulate that any discussion of the fortunes of the next governor is necessarily conditional, even more so than in advance of a traditional election.

A recall of Newsom is the antithesis of a sure thing; a poll by the Public Policy Institute of California released Wednesday showed Newsom beating the recall by 58%-39%, a slightly wider margin than in earlier polls. Early returns of mail-in ballots are tending Democratic, and therefore presumptively anti-recall, by a 2-1 margin. Ballots are also coming in heavily from liberal regions of Northern California.

But much could change in the next two weeks. Only 20% of ballots from registered voters have yet been accounted for, and the partisan affiliations of walk-in voters on election day is among many factors that are hard to predict.

So it’s reasonable to ask what a Gov. Elder could achieve in the roughly 15 months between the recall and the beginning of 2023, when the victor in the gubernatorial election of November 2022 would take office.

One question is how far and how strongly Elder would try to push his stated positions on issues dear to the California electorate.

He says he would rescind mask and vaccine mandates — “Californians who assume the risk of not wearing a mask or not getting vaccinated should not be forced to do so,” he says on his website — though the PPIC survey showed that Californians are heavily in favor of anti-COVID requirements, including the mandate that proof of vaccination be shown in order to enter certain indoor spaces.

As my fellow Times columnist Jean Guerrero has reported, Elder “has repeatedly twisted crime statistics to portray Black people as more violent than whites — a theme for white supremacists. He blames Black communities’ struggles on an alleged lack of self-determination. (A David Duke talking point).”

Elder opposes minimum wage rules, public assistance programs, and California’s expansion of Medi-Cal to immigrants without documentation. He opposes tuition breaks at state colleges and universities for state residents, sanctuary laws or citizenship for Dreamers, immigrant children who were brought to this country without documentation by their parents.

Elder unapologetically associates himself with Donald Trump, who was trounced in California by Democrat Joe Biden by a 2-1 margin in California. He’s known for having mentored Trump’s uncompromising anti-immigrant advisor, Stephen Miller, when Miller was a student at Santa Monica High School.

Hewing to those positions is likely to inspire powerful pushback from California voters and their legislative representatives, reducing Elder’s ability to achieve anything. Whether Elder succeeds as governor, Sragow says, “depends on whether he wants to accomplish significant policy changes in Sacramento or be a talk radio host saying whatever he wants but sitting in the governor’s seat.”

Another obstacle is that Elder, like any Republican emerging as the victor in the recall, would be seen as a short-timer.

“California is such a blue state that it will be incredibly difficult for a Republican governor to get reelected, no matter how centrist or how conservative he is,” says Dan Schnur, a former Republican political strategist who now teaches at USC and UC Berkeley and labels himself an independent.

Elder’s campaign told me by email that he would overcome opposition by exploiting the governor’s veto power; appointing people “to the judiciary, executive agencies, and other agencies”; promoting ballot initiatives to “bypass the legislature and go directly to the people via California’s robust direct referendum process”; and declaring statewide emergencies on crises such as homelessness.

There are significant limitations to all those options, however.

Democrats currently hold veto-proof majorities in both houses of the legislature — two-thirds votes are required to override a governor’s veto, and the Democrats hold 75% of the seats in the Senate and Assembly.

Gubernatorial nominations for the top judicial posts in the state Supreme Court and Courts of Appeal require confirmation by the Commission on Judicial Appointments following a public hearing. The commission is composed of the state attorney general, an elected position; the state’s chief justice, and a senior presiding justice of the court of appeal.

Superior Court judges are elected to six-year terms by their county voters; although the governor can make appointments to vacancies, they must be filled at the next general election.

As for emergency powers, they can be substantial, but may also be constrained by the Legislature.

“Executive authority and emergency powers have never been defined all that clearly,” says Schnur. Any Republican governor trying to test the limits of that authority “would end up spending much of his next year in court.”

One area where a Republican governor, whether Elder or otherwise, could affect politics on a national level involves the U.S. Senate, in which Democrats exercise razor-thin control — a 50-50 split, with two independents caucusing with 48 Democrats and Democratic Vice-President Kamala Harris possessing a tie-breaking vote.

If California’s senior senator, Dianne Feinstein, 88, were to relinquish her seat for whatever reason during a GOP state administration, a Republican would almost certainly be appointed to replace her.

That would swing the Senate to a Republican majority, albeit possibly for only a short time. California law requires that a senatorial vacancy be permanently filled at the next general election, which would be November 2022, the same date as the next gubernatorial election, with the victor serving out the balance of the departed senator’s term. Feinstein’s current term ends in 2025.

One imponderable in predicting the course of an Elder governorship is how his accession to the job will itself affect the state’s political dynamics.

“Every time you have a new governor, there’s a new mandate, whether it’s 50% of the vote, or 70%, or 30%,” says Fabian Núñez, who served two terms as a Democratic Assembly speaker in 2004-08, during the Gray Davis and Arnold Schwarzenegger administrations.

“The idea that every Democrat is going to stand strong and be united — I don’t know that that’s the case,” Núñez adds. “If you elect a Trump Republican, the Trump agenda is going to be alive and kicking in the state, and Democrats in swing seats are going to start to be concerned about their own viability.”

Clues to how a recall victor can succeed or fail as governor can be found in the aftermath of the last successful recall, the 2003 election from which Schwarzenegger emerged without a majority in the popular vote, though with a vastly greater mandate than Elder is likely to have: Schwarzenegger’s 4.2 million votes constituted 46.8% of all the votes cast in the recall, and 48.6% of the votes cast for any of the alternative candidates.

The electorate seemed to wish Schwarzenegger well when he came into office. His plan to close the state’s budget deficit with bonds was approved by the voters by a 2-1 vote in March 2004, only five months after he became governor. But he also had tried to reach across the aisle.

As a result, The Times observed, “Most Democrats in the state Legislature, as well as [Democratic] Controller Steve Westly,” were on his side in supporting the bond issue.

Schwarzenegger eventually squandered that goodwill, however, in part by picking fights with the state’s nurses and teachers and generally pushing his tough-guy image too far.

He managed to place four initiatives on the ballot for a special election in November 2005, including measures to undermine public union dues collections, lengthen the probationary period for teachers, impose state budgetary limits and change the redistricting process.

All four lost in what The Times called “an election that shattered his image as an agent of the popular will.”

That said, Schwarzenegger won reelection in 2006 in a landslide. His second-term policies became more familiarly Republican, including taking a hatchet to the state’s safety net. By his final year in office his approval rating had fallen to 22%, tying Gray Davis, the Democratic governor he had replaced in the recall election of 2003, for what Los Angeles Magazine identified as “the lowest recorded approval rating in California history.”

Yet Schwarzenegger also scored important victories. He launched a $42-billion infrastructure rebuilding program. He signed AB 32, a landmark law aimed at reducing California’s emissions of greenhouse gases that placed the state in the forefront of the battle against global warming, where it remains to this day.

In 2006, he signed an increase in the state’s minimum wage to $8 an hour, at a time when the federal minimum was $5.15, following a long period in which the state‘s unified Democratic leadership was unable or unwilling to act. (The current state minimum is $14 for employers of more than 26 workers and $13 for smaller businesses, with a $1 increase scheduled for Jan. 1; the federal minimum is only $7.25.)

“He evolved as a political leader,” Núñez says. “But his values were pretty consistent with the values of most Californians.”

The message for Elder or any Republican victor in the recall election is that a governor can’t tack too far from the California electorate. When Schwarzenegger tried to do so, he found California to be ungovernable. But when he followed the voters’ lead, he produced a lasting, positive legacy. Are today’s recall candidates listening?